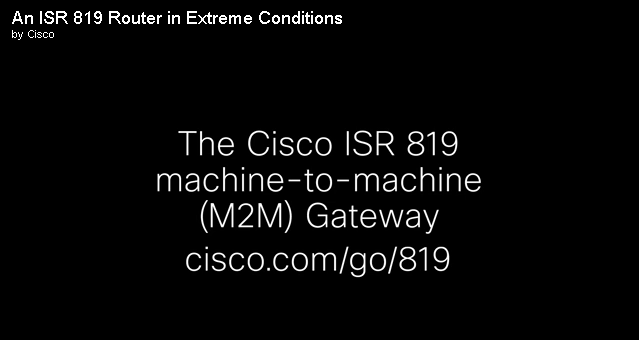 Lucky there is a big disclaimer at the beginning of this video. Otherwise I would be tempted to test such things and then plug it in to see if it still start (at least) and run.

It’s a nice commercial from Cisco, but to be honest I feel bad for this poor device:

Cisco Systems announced another major step in its quest to create “borderless” networks that allow organizations and individuals to communicate anytime, anywhere and in any way they wish.
With the public launch of the second generation of the Cisco Integrated Services Router (ISR G2), the company is making it far easier and more affordable for businesses to bring the benefits of video networking, on-demand computing and Web 2.0 technologies to branch offices, retail stores and other remote sites.
When Cisco introduced the original Integrated Services Router in 2004, it clearly hit on a pent-up need to help better connect branch offices to company headquarters. The first generation ISRs became one of the fastest-selling networking products ever created, reaching 2 million units shipped in two years. Now more than 7 million units are in use worldwide.
The ISR – perhaps more than any other Cisco product – reflects the breadth and depth of the company’s networking expertise. In the first generation, Cisco combined the best of its routing, security, voice and other capabilities into one device to greatly simplify branch office operations. Now Cisco is writing a new chapter in that tradition.
Read Cisco’s vice president of network systems, Marie Hattar, full interview with questions and answers on Cisco’s official homepage.