26X. That’s the amount of increase in traffic the global mobile internet is going to have over a 5 year span from 2010 to 2015, as forecast by the latest iteration of the Cisco Visual Networking Index.

The next lines and video do not belong to me, but they exist thanks to Cisco VNI. Interesting forecast. Who is too bored to read this, check the video at the end.

As many of you long time readers know there are few things that get me as excited as this data because:

1. While we read about point announcements here or new services there, this gives context to us all and allows us to look at the “forest” vs. just the “trees”.
2. Our customers really, really (is it overdoing it to say “really” again) like this data, which gives us an opportunity to showcase just one of the ways that we strive to be not just a vendor but a partner to them, and it’s always great to spend more time with them.
3. The data is the result of a great team that I am proud to be a part of as well as data feeds from not just third party industry analysts whose forecasts we incorporate, but also that of contributions of over 390,000 people worldwide feeding us their unique, primary data about their network experience directly from their devices.
4. I think big numbers are simply cool.

And big numbers these indeed are. A twenty-six fold increase traffic is staggering, with the global loads increasing from 0.24 exabytes a month in 2010 (an exabyte is a 10 to the 18th power bytes…or a billion gigabytes…not to mention, a fun word to say in its own right) to 6.3 exabytes per month in 2015. On an annual basis, 6.3 exabytes is 75 exabytes a year, which is equivalent to 75 times more traffic all the global mobile and fixed IP traffic in 2000 when anything and everything possible was going on the internet.

75 exabytes is equal to…

75 exabytes is also the equivalent of 536 quadrillion SMS text messages — but it’s not going to be driven by text.

Rather, video is going to be the main driver. In 2011, we forecast that video will pass the tipping point and be responsible for more than 50% of the global mobile IP traffic…in 2015, it will be 66%.

Let’s look at the underlying trends:
* More devices — we forecast by 2015, there will be 5.6 billion personal devices on the mobile internet, plus more than 1.5 billion machine-to-machine connections. Think about your own household. Any new devices connected to the mobile internet? We had 3…and it’s not even getting to our birthday season yet. And all of them featured a lot of screen space just calling out more use of rich media and video. (the bigger the screen size, the higher the resolution of video needed, and the more bandwidth consumed) * Enhanced computing — those newer devices are also packing some punch. Whether it’s smartphones or tablets (the fastest growing device type in our forecast), they are increasingly getting stronger chipsets which make them able to do more, such as running multiple bandwidth consuming applications at once.
* Faster mobile speeds — the mobile network is getting faster and faster (worldwide it more than doubled last year and we forecast it will increase another ten-fold in the next 5 years) and, as history has proven, the faster the network, the more we can do with it…the more we do with it. My sister and brother in-law have fully gone down the path of mobile broadband substitution. With their 4G service, watching a show on their TV connected to their laptop is a breeze. With a smoking fast mobile connection, why wouldn’t we use more video? 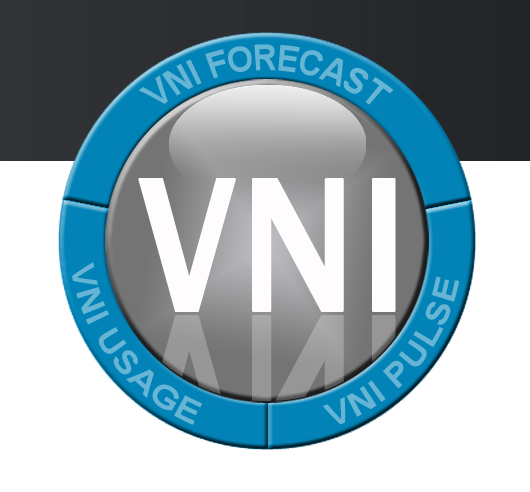 Cisco Visual Network Index (VNI) is an interactive tool that can help you to forecast and analyze the growth and use of IP networks worldwide. Cisco VNI intiative includes distinct elements to provide a comprehensive view of the changing IP network landscape:

Cisco VNI Forecast is a model for the estimation of future global IP traffic growth.

This can help you to estimate global IP traffic growth using data sources like Application Type, Country and Region, Segment or Network. You can access this VNI Forecast Widget and using the Wizard Editor you can create your own forecast. If you have more experience, there is also an advanced editor to predict IP traffic growth. I’m going with the Wizard to show you what I mean and why I like this tool.

IP traffic estimation by Application Type. You can select what applications to check from Web/Email, File Sharing, Internet Gaming, Business Internet, IP WAN and many more. Following the Step by Step wizard you can end with the following graph: 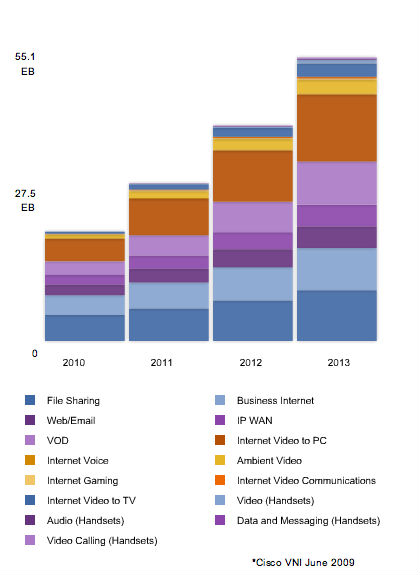 I have checked all the applications in the diagram above. 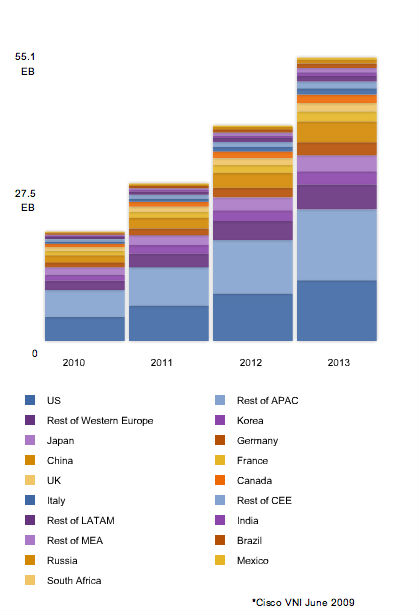 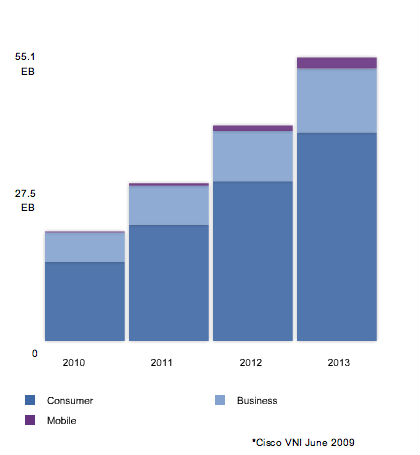 And finally Estimation by Networks: 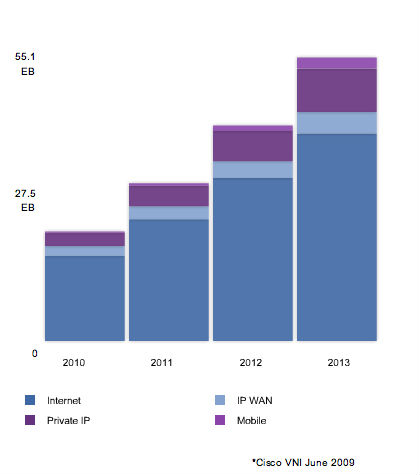 If you want to help Cisco and improve this estimations you can download 2 applications: Pulse which can be installed on a PC (too bad that there is no version for Linux or Mac) or GIST for mobile devices like Blackberry or Iphone.

To see how the statistics gathered from this software look, check on Ciscovnipulse.com. It’s a real nice interactive map where you can find useful information. I don’t know if this numbers are accurate, as they rely on volunteer users which install Cisco VNI software, but certainly they are trying to make a good job together. If this forecasts are true or not will see in the future.

Cisco Policy Based Routing provides a flexible mechanism for network administrators to customize the operation of the routing table and the flow of traffic within their networks. Policy Based Routing (PBR) offers many advanced features, including selection and forwarding of traffic to discreet Virtual Routing and Forwarding (VRF) instances, as well as Enhanced Tracking of the availability of next-hops. More about PBR you can read here.

Before we start this tutorial please download the topology file which contain the routers connection, BGP topology and some explanations. As you can see in the topology file, traffic going from R4 to R5 will choose the shortest path through R1-R2. For this tutorial let’s assume that we want the traffic from R4 to R5 (and viceversa) to flow through path R1-R3-R2 (BGP is full mesh configured among these devices). For this we need to apply Policy Based Routing (PBR) on R1 and R2. What is PBR basically doing? It will change the next-hop for interesting traffic to R3 on this devices.

Please see below the tutorial about how to configure PBR: 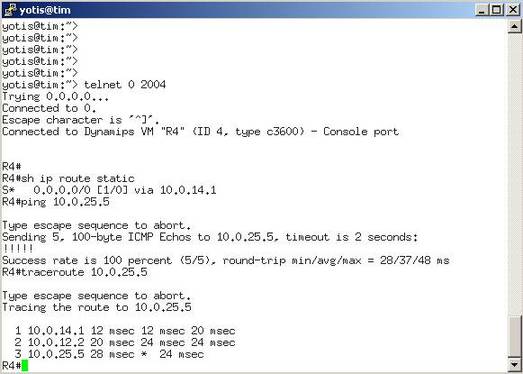 Before going further on, please download the topology and the initial configuration files and have a close look into them (mostly into topology drawing). Also, this tutorial is addressed to people that know what is BGP and how to do a basic configuration for peering establishing.

For modifying the BGP automate selection of the best path, we have to modify some of BGP attributes from the table below:

Since today we will deal with outgoing traffic, we are interested in Weight and Local preference attributes, which we have to modify to reach our desired result. For the incoming traffic I will make another tutorial in some days.

So, let assume that we have some networks in the LAN after R1 in the topology and we advertise this into the BGP network. On R3, we will learn this prefixes by the way of R1 as it is the shortest path. But in our case the shortest path does not mean the fastest one. As you can see the connection between R1 and R3 is a Serial connection (let’s assume E1). The connections between R1 – R2 and R2 – R3 are FastEthernet connections. Even if this a longer path, for us would be better to reach the LAN subnets in behind R1 through R2, as this is more faster (bigger bandwidth and lower latency). We will force the outgoing traffic through R2 by modifying the Weight and Local preference attribute. 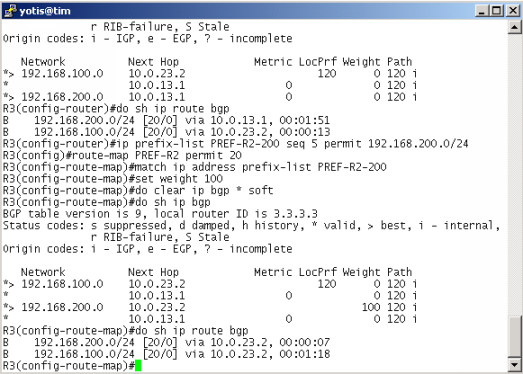 Some time ago a person asked me to set the HTTP traffic to 256 kbits during weekdays from 8:00 – 16:00, to limit “the fun” in the office while other are working. In theory I’m against this type of policy, because if you have a team of network engineers and they have to access cisco.com in the same time for information and other stuff like IOS download, then this will take a lot of time. Of course if you see that the productivity is going down because 80% of the traffic is to YouTube site (nothing against them, just picked randomly), then such measures are welcomed.

Since the discussion below is beyond the scope of this tutorial and represent only a personal opinion, let me tell you what I’ll show in the tutorial below.  On Fa0/0 (out connection) we will limit the HTTP responses sent out to 256kbps from Monday to Friday between 8:00 and 16:00 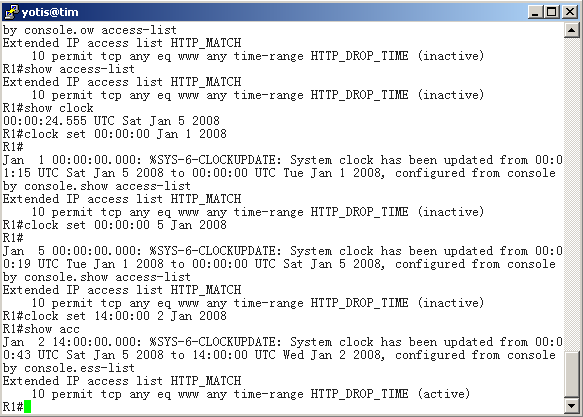