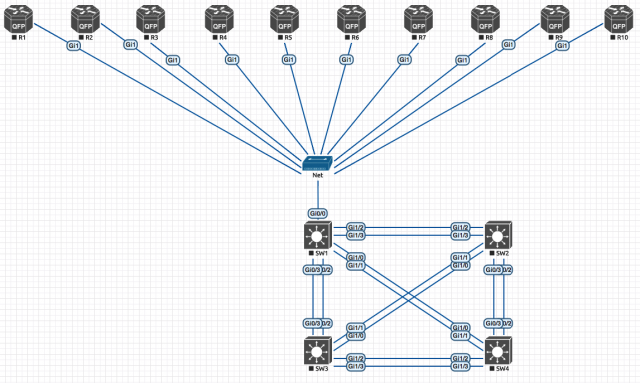 The last days I was working on adapting INE‘s lab topology, most specific the CCIE Routing and Switching v5 one, to be used in EVE-NG.

In my opinion, INE offers some of the best training materials for Cisco and Juniper certifications. Along certification training you can find in their All Access Pass Subscription valuable learning materials for Network Automation, Security and Traffic Analysis (like Wireshark).
By the way I’m not affiliated with nor this post is the result of some sponsorship from INE. I just wanted to have the possibility to use their materials on using the entire topology, including the Switches, in EVE-NG.

I’ve picked Cisco‘s vIOS L3 and L2 images to support the topology in EVE-NG. You can argue that vIOS is a bit unstable and lacks some features, that CSR1000v images are better when combined with real Cisco switches and so on. Yes yes, all these are quite right, but I’m not here to debate about the best way to create a topology, rather a simple and sustainable one which works even for low end devices with less resources (CPU, RAM). Is no secret that vIOS will use less resources than CSR1000v images.

It brings me great happiness to let you know that I’ve succeeded in adapting not only the topology (not that hard honestly), but also the initial configuration files. The challenge lies in the fact that vIOS L2 images are build to support Ethernet ports in group of four, resulting in a slight different naming convention.

If you’ll check INE’s CCIE R&S v5 topology, the Cisco switches are using the Port from 19 to 24 to interconnect. On switch SW1, Port 1 is used to bridge the switching part to the routing one. You cannot replicate this exact port configuration scheme using vIOS L2 images.

I was forced to come with an alternative scheme, to map the original interface to the virtual ones and to adapt the configuration files.

This is what I came with:

The interface mapping is as follows:

For the Routers is easy, since the interfaces are almost the same: 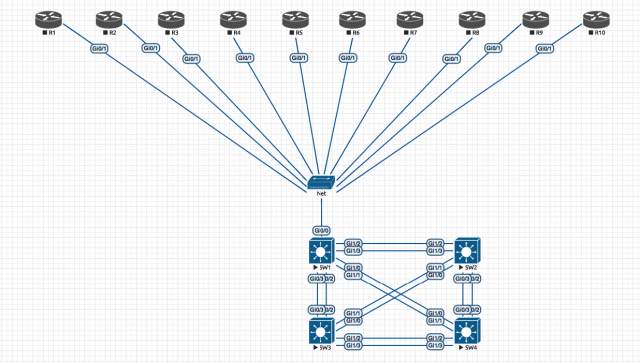 We have 10 Routers using vIOS-L3 and 4 Switches using vIOS-L2. The connections between routers and switches are facilitated by the Net bridge.
10 routers should be sufficient for most of the labs. However if you need more, just add nodes and connect them to the Net bridge using the Gi0/1 interface.

As said previously, the configuration files have been adapted to match the interfaces listed above. I’ve tried my best not to have any errors, I also did some testing, everything looks to be fine. Most probably you’ll notice some errors at the copy / paste, but these are just cosmetic and related mostly to some proprietary CSR1000v commands or management interface which is not needed in EVE-NG. If you encounter errors that are critical, please let me know and I’ll try to correct them.

If somebody from INE’s team reads this post (that would be something :)) and consider inappropriate to share the modified initial configuration files, please let me know and I’ll take them down. They are derived from the public available ones on the CCIE R&S v5 Topology Diagrams & Initial Configurations page and do not contain any workbook information or somehow else related to INE’s training materials.