A few days ago I did encounter a task in one of these preparation workbooks for CCIE R&S Lab which was very tricky. This task is not a hard one and does not require extensive knowledge (it can be a CCNP level question as well), but the way the question is formulated can create confusion.I would appreciate your comments on this topic.

The task states that I have a number of subnets from which the followings are important for
our issue:

The other present subnets are something like 10.7.x.x. I add this here just to see that it does not affect the result of this task.

The request is to configure a prefix-list following these rules:

– allow all subnets in 10.4.0.0
– as specific as possible, I should not allow other prefixes
– minimum number of prefix-lists

Considering the above one I did consider the following to be the correct answer:

However the proposed solution was:

Both solutions are working, nevertheless which one would be the correct one in the exam?

I asked this question on the GroupStudy List, and Maarten Vervoorn came up with a new proposal:

Also a good solution, but is the best solution? Hard to say. The advice that I got is that if you have such task in the lab exam to describe the issue to your proctor, explain all possible solution so he or she can see that you fully understand the multiple solutions and base on the answer pickup the best solution. I think this is the only way to solve this kind of questions. If you have other ideas, I would like to hear them. 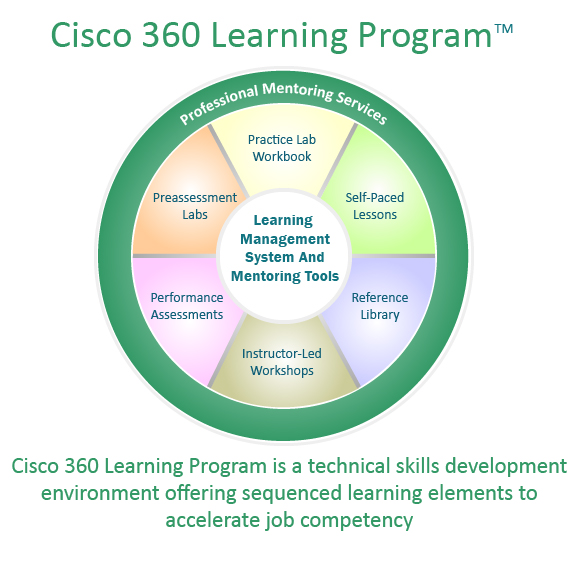 Today I’ve received an e-mail with the following content:

CCIE certifications are as popular as ever. A recent publication has listed both the CCIE and the CCIE Voice certifications in their top 10 IT networking list* and has cited both as highly sought-after by employers. If that’s not enough motivation to keep moving up the certification ladder, the Global Knowledge 2010 IT Skills and Salary Survey identifies the CCIE credential as the highest paid networking certification!

The Cisco 360 Learning Program can help you obtain the knowledge and skills you need to pass the rigorous CCIE certification lab exam. As the only Cisco developed and approved CCIE training program available, the blended learning curriculum contains over 350 hours of practical, hands-on lab configurations that have been proven to accelerate development.

Now, Cisco has enhanced its expert-level training program to offer additional value and training assurance to help you work your way towards a Cisco CCIE® certification. Beginning June 22, 2010, you will be given more time to practice expert-level skills using the Cisco 360 Learning Program components. The subscription period for all components that are accessed through LMS will be extended from 12 months to 18 months.

The following benefits** will also be available to qualified Cisco 360 Learning Program students:

It seems that Cisco is trying to attract more audience to it’s program. The benefits are great, what can I say, but in this time also a change in the price system would be welcomed.

To increase testing opportunities and add convenience for certification candidates, Cisco® will be offering the CCIE® Routing and Switching lab exam in additional locations in April 2010, as listed below. A new location in Johannesberg/Midrand, South Africa has been added. The exams will be administered at Pearson Professional Centers which are designed for secure, high-stakes professional exams and have been used by medical, legal and other examination boards for over eight years. Cisco already uses Pearson Professional Centers to administer the practical exam for CCDE® (Cisco Certified Design Expert). More information on the centers is available at www.pearsonvue.com/cisco/ccie.

Important change in all CCIE labs exams. Finally the attendees for CCIE RS Lab will now feel discriminated by the Core Knowledge Questions, as starting with next year, this will become mandatory for all CCIE Lab exams.

Interesting is that they say for all CCIE Labs exam, but below the Security and Voice exams are not specified…

See below the official announcement:

Effective January 4, 2010, the Cisco CCIE® Service Provider, Storage, and Wireless lab exams will add a new type of question format in a section called Core Knowledge. In this new section, candidates will be asked a series of four open-ended questions that require a short written response to be entered into the computer, typically several words. The questions will be randomly drawn from a pool of questions on topics eligible for testing. Candidates can review the topics by visiting the CCIE track information on Cisco.com or the Cisco Learning Network. No new topics are being added as a result of this change.

Candidates will have up to 30 minutes to complete the Core Knowledge section and may not return to it once they have moved on. A passing score on the Core Knowledge section is required to achieve certification. Core Knowledge questions were implemented on Routing and Switching labs in February 2009 and Security labs in June 2009, and allow Cisco to maintain strong exam security and ensure that only qualified candidates are awarded CCIE certification. Candidates with exam dates on January 4, 2010 or later should expect to see the new question format on their lab exam.

To reflect the growth of the network as a service platform, Cisco is revising the certification requirements for CCIE Routing & Switching (CCIE R&S)–the expert level certification for network engineers. The new requirements were developed with assistance from Cisco enterprise customers and reflect the expectations of employers across industries.

The competencies required for CCIE R&S v4.0 certification were released on May 5, 2009, and are available on the Cisco Learning Network under the CCIE R&S v4.0 Written Exam topics and CCIE R&S v4.0 Lab Exam topics. Exams based on the new requirements are scheduled for release on October 18, 2009, and will immediately replace the currently available v3.0 exams. Candidates who plan to take their exams on October 18, 2009, or later should prepare using the new v4.0 exam topics.

Both the written and lab exams will be refreshed with new questions and will cover MPLS and VPN networking. The written exam will add scenario-based questions to the multiple choice questions, and the lab will now require hands-on troubleshooting of preconfigured networks, in addition to configuration. Exam duration and pricing will remain the same, with the two-hour written exam at USD$350 and the eight-hour lab at USD$1400.

A beta version of the new CCIE R&S v4.0 written exam (351-001) will be available to all customers in the July–August 2009 timeframe at a discounted price of USD$50. An announcement will be made when scheduling begins.

Cisco 360 Learning Program components aligned to the new CCIE R&S certification standards will be available on May 11, 2009. All current students will have access to the new materials throughout their subscription period. New materials include additional lessons on MPLS and troubleshooting, enhanced coverage of these topics in the instructor-led workshops, an updated Practice Lab Workbook for self-paced practice, and new Performance Assessments that gauge skill level and offer mentoring feedback.

CCIE Assessor, the first CCIE R&S practice lab, will be retired on June 5, 2009, and will be replaced by the 10 eight-hour assessment labs available through the Cisco 360 Learning Program.