First let’s have a look to the topology: 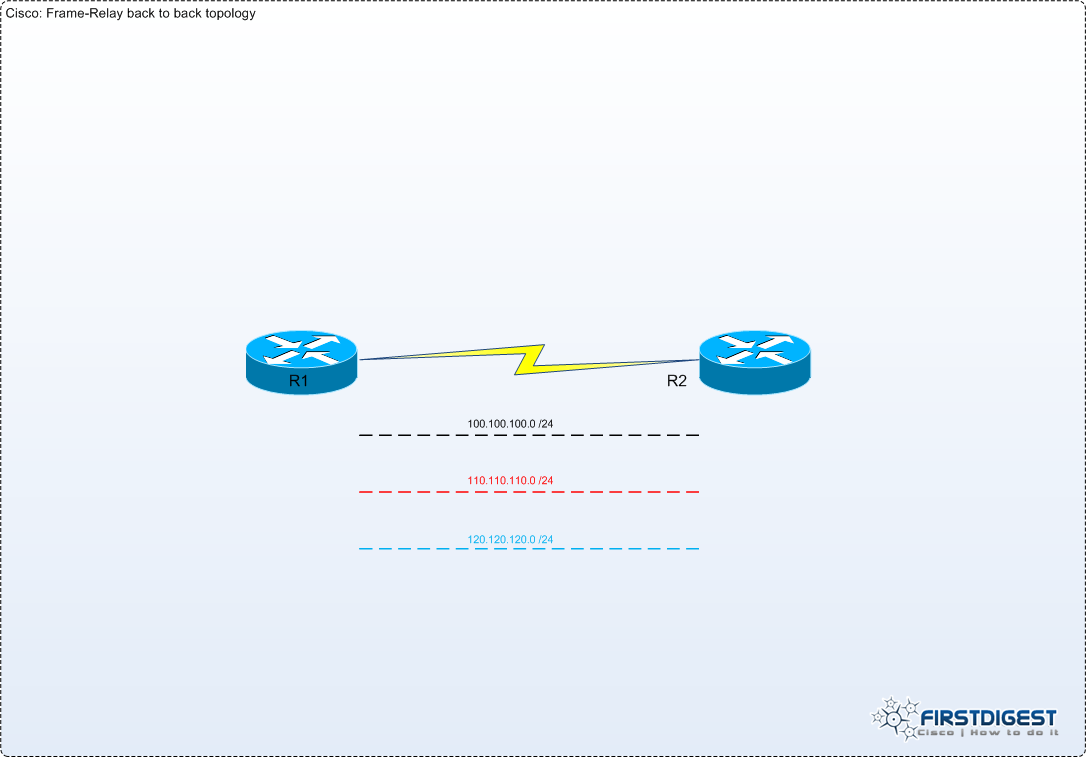 We have 2 routers, connected back to back. The interface status on both routers:

First let set up the encapsulation to Frame-Relay and to bring the interfaces UP:

Everything should be fine now, but it’s not, as if you check your interfaces you will see that they are in a Up/Down status on both routers:

Even this is messing up a little bit with our brains, the Up/Down status is normal in this phase. Why? Remember that we do not have a FR switch, both interface consider themselved DTE side and LMI is not working. You can check if LMI like this:

You will see Sent packages on both routers, but nothing received as there is no FR switch. In this conditions we have to disable LMI and to assign DLCIs manually. To disable LMI, issue the following command under Frame-Relay interface:

Now interfaces should be in a Up/Up status:

As in this moment everything looks fine, let’s start to configure the Frame-Relay back to back connections. Obvious, at least for me, when you have a back to back connection, first things that comes into your mind is a point-to-point interface. Let’s start with this configuration (we will use from diagram the black line connection with subnet 100.100.100.0 /24) . I will show only the configuration on the primary router, but it’s the same on the secondary one, just with a different IP address in the 4th octet.

Remember DLCIs are only local significant so you can define whatever number you want there, but of course the same DLCI number on both sides. Let’s check if everything is fine:

We can see a point-to-point dlci in frame-relay map, and a static defined PVC. If you ping from R1 to R2 and viceversa it should work.

This was the straight forward solution, but going a little bit more into details, you can be required in some situations that you have to use a multipoint Frame-Relay interface. Actually what is a multipoint interface more than multiple point-to-point interfaces. Let’s take the sencond line (red one, with subnet 110.110.110.0 /24 in the topology) and configure this back to back connection using multipoint interfaces:

As you see the configuration is different from the point-to-point interface. Actually under multipoint interface you can issue the frame-relay interface-dlci 110 command, but this will not help too much. Remember that we have disable LMI in the first steps because we do not have a FR switch. No FR switch means no automatic L3 to L2 mapping. In other words even if you specify the interface-dlci, the interface being a multipoint will not know where to forward packets. Why this didn’t happen in the point-to-point scenario, you may ask. Well, because there the keyword is interface sx/x point-to-point, so by it’s nature the interface knows that there is only one destination possible, meaning the other end (or point if you want).

In this scenario we had to manually map L3 to L2 with the command frame-relay map. Actually you only need the first frame-relay map, pointing to the other router IP address, but I add the last command just in case you want to ping your own interface.

Now maybe you ask which is the third scenario (blue line). Well, this is not very common in the real environment, but maybe you have to deal with it in a special condition like lab environment, Cisco exam and so on. Let’s say that you have a request that you need to have 3 virtual PVC connections, but only 2 subinterface. Now, you already have 2 subinterface configured, so how can you achieve the third PVC connection. The answer is that you configure the main interface with the same configuration like in multipoint subinterface scenario. By it’s nature and interface is described point to multipoint, so in a Frame Relay scenario like this you have to manually map L3 to L2:

If you followed this tutorial, at the end you should have reachability over the 3 subnets.