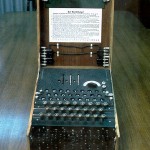 I know that it’s not the latest discovery in cryptography area, but still this device amazed me with it’s ingenious construction and way of utilization.

An Enigma machine is any of a family of related electro-mechanical rotor machines used for the encryption and decryption of secret messages. The first Enigma was invented by German engineer Arthur Scherbius at the end of World War I. This model and its variants were used commercially from the early 1920s, and adopted by military and government services of several countries — most notably by Nazi Germany before and during World War II. A range of Enigma models was produced, but the German military model, the Wehrmacht Enigma, is the version most commonly discussed.

The machine has become notorious because Polish mathematicians-cryptographers and then Allied cryptographers were able to cryptanalyze, and thus decrypt, a vast number of messages which had been enciphered using the Enigma. The intelligence gleaned from this source, codenamed ULTRA by the British, was a substantial aid to the Allied war effort. The exact influence of ULTRA is debated, but an oft-repeated assessment is that decryption of German ciphers hastened the end of the European war by two years.

Though the Enigma cipher had cryptographic weaknesses, in practice it was only in combination with other factors (procedural flaws, operator mistakes, occasional captured hardware and key tables, etc.) that those weaknesses allowed Allied cryptographers to cryptanalyze so many messages.

Enigma cryptanalysis contributed greatly to the success of Allied war efforts—in the Battle of Matapan in March 1941; in course of the Battle of the Atlantic, beginning in the latter part of 1941; in Rommel’s efforts to capture Cairo in 1942; in the invasion of Sicily (1943) and mainland Italy (1943–44); in the planning and execution of Operation Overlord (the Allied invasion of France, 1944); and in the subsequent drive to and through Germany. Evidence suggests that Soviet strategy and tactics against Nazi Germany likewise benefited from Ultra intelligence, conveyed to the Soviets by a variety of conduits.

Below you can see a demonstration of how Enigma was used to encrypt and decrypt messages thanks to NetworkWorld.com: