In this post I proposed to discuss a little bit about Hot Standby Router Protocol and how it can be configured on a Cisco device. For this I have chosen the following topology: 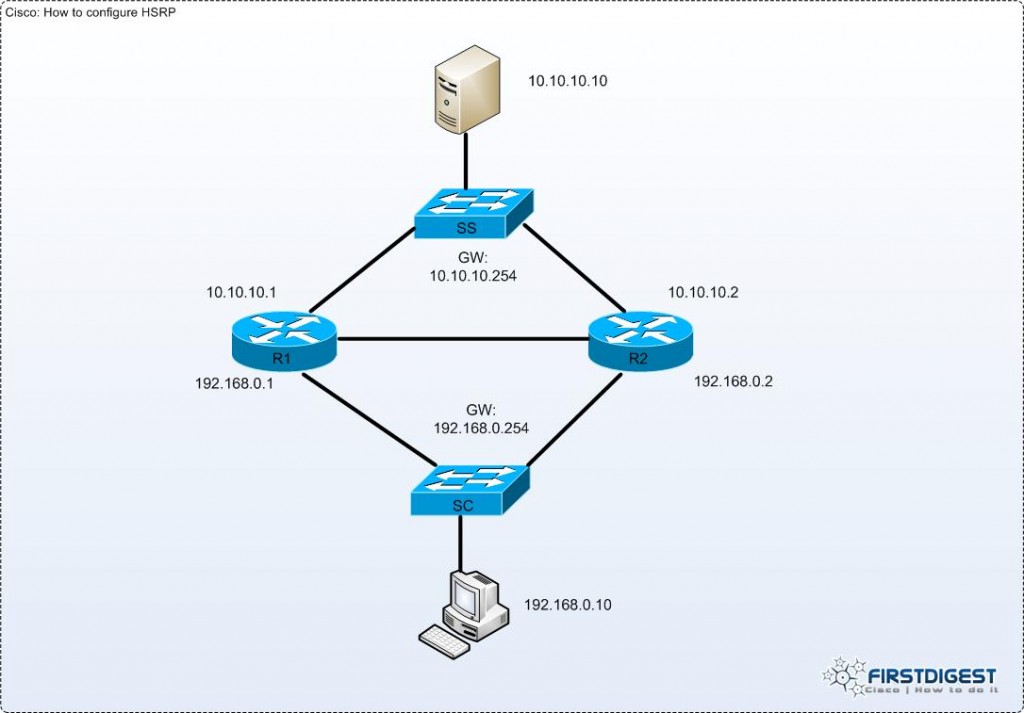 I had in mind this scenario due to the fact that the traffic can take multiple paths in case of link being down and this give us the possibility to have a little bit of conversation on HSRP topic.
HSRP is defined in the document RFC2281 and according to the definition in this document: “The Hot Standby Router Protocol, HSRP, provides a mechanism which is designed to support non-disruptive failover of IP traffic in certain circumstances.” If you want to read more about the details how HSRP is working, please the RFC2281. I think there is not point in reproducing here what is already written there.
Regarding our topology, what you should know is that after configuring HSRP on R1 and R2 we will achieve a failover mechanism for the traffic from the Client (192.168.0.10) to the Server(10.10.10.10). From the beginning we will assume that R1 and R2 have the proper routing already configured to reach this destinations.

In the below presentation, you will see how the failover is achieved and what’s happening when you have a proper HSRP configuration in case that the link SC – R1 is broken:

So, how to achieve this behavior? From the topology you notice that proper configuration of HSRP involves 3 IP addresses from the same subnet (in our case this is 192.168.0.0 /24). One of the IP is configured on R1 the second one on R2 and the third one is HSRP IP address, which will be announced to the Client as gateway.

Configuration is straight forward on R1:

First we configure an IP address on the interface. Then we configure HSRP by typing the command “standby” followed by HSRP group (in our case group 1) and then the IP address. HSRP default priority is 100, and the principle is the higher the better. To force the path R1-SC to be the preferred one, we increse the priority to 110, making R1 to be the “Active” one. The other router, in our case R2, will have the HSRP status “Standby“. Maybe you are wondering what happens if you don’t configure the priority and both routers are having the same value 100. In this case HSRP has a mechanism that help it to chose the active router by comparing the IP addresses and chosing the one with the higher value. In our case this would be R2 (192.168.0.2 > 192.168.0.1).
Another useful feature that I recommend to configure for HSRP is “preemption“. The HSRP preemption feature enables the router with highest priority to immediately become the Active router. The configuration is also very simple and inquire only one additional line to the above ones:

Also recommended is to configure “authentication“ between the HSRP participants:

where “somepassword” can be what ever you want.

Going back to the topology, another scenario can take place. What if the link R1 – SC remains active, and instead the R1 – SS goes down. Since the R1 – SC is UP, the router R1 has no intention to cease the HSRP Active status. If you are having some kind of dynamic routing between R1 and R2, then you are on the safe side as the traffic will flow like in the scenario below (I’m assuming R1 to be the Active one for both R1-SC and R1-SS):

Remember that if do not have some routing between R1 and R2, the packets will be dropped on R1 as they will not have any path to the Server IP address 10.10.10.10.

This situation can be avoid with another HSRP feature, that will force the R1 to change it’s status from Active to Standby by monitoring the interface from R1 to SS. This feature is called “interface tracking“. This HSRP feature you have to configure at least on the router which is usual in Active mode:

In this scenario I assume that interface Fa1/0 is the connection to SS switch. This tracking command is watching for the status on the interface Fa1/0. When it’s status changes to “down” the “priority” value (110 in this example) is decremented with 30 (or whatever you will configure in the command line). After decremental, the “priority”
will have a value of 80 which is lower than the default one (100), forcing R2 to become the Active router and changing the R1 status to Standby.

Checking the status of an HSRP participant is very easy, and you can see this in the output below:

All the HSRP configuration from this article can be fine tuned or extended according to your needs. I have presented here only the basics about the HSRP configuration. If you want don’t be afraid to explore and to “play” with the commands. Of course I would recommend to do that in test environment first.