Today, I had to deal with IPv6 configuration for my CCIE preparation and I said to write a small tutorial about IPv6 for it’s basic stuff. First of all IPv6 is not more complicated that IPv4, it just look like it is. Second, and this is my personal opinion, I think that as long as IPv4 will be on the market and things like NAT can overcome the problem of  IP addresses being exhausted, IPv6 will not be implemented on a large scale. Let’s be honest, I’m more OK in a discussion saying that I had a problem with the IP address 192.168.100.100 than to say 2001:128:1F:633:207:85FF:FE80:71B8 (IPv6).

But what we like and what we have to know as network engineer, that’s a different story. For this reason I said that some information about IPv6 and how to configure it and test a point-to-point connection on a Cisco device, would not hurt anyone.

After this short information (trust me it is short compared to detailed books) I hope that the things look a little bit more clear to you regarding IPv6 and you understood that this is not an IT network monster of any kind. Let me show you a small example of how you can configure the Cisco interfaces for IPv6 connectivity. Routing and more advanced stuff in a future post maybe.

For this tutorial I will use the same topology like in the previous post, please have a look to it here, but for the IPv6 configuration will only focus on the LAN side, the connection between R1 and R2. There is already a working IPv4 link between this 2 devices. Please click below to see the example: 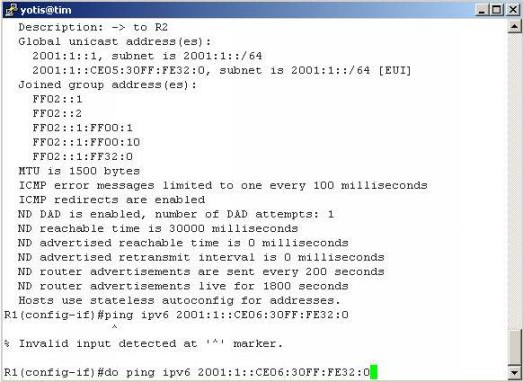 If for some reasons the tutorial above is not available for you, please check this text file which consist of the configuration needed to enable IPv6 configuration between 2 Cisco devices.