A few days ago one friend on mine announced me that InternetworkExpert released a GNS3 configuration for their v5 topology.

When I had check INE’s website, I could not found the link to GNS3 topology. To be honest I was expecting INE to announce with big letters this new development, but I was quite silent (or I’m not reading carefully enough their website).

To fin GNS3 configuration, there is a small catch. You have to go to INE resources webpage, and from there to Dynamips (there is no GNS3 link). If you ever used the INE’s Dynamips config, that this page is familiar for you. Somewhere in the middle there is a link with “Click here to download the INE Topologies for Dynagen“. You download this archive file and inside you’ll find among other configuration a file called ine.routing.and.switching.topology.5.00.gns3.net: 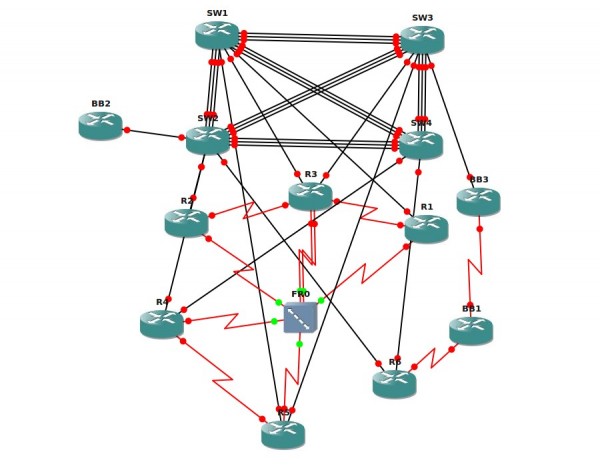 This is the file which you are looking for. Of course you need to edit and adapt it to your local configuration (IOS, path location…).  What is different from Dynamips file? Almost nothing, but you have a graphical view of the topology and if you put your mouse over a link, you’ll see where is the connection pointing too. It can help you spare some time in the configuration, but there is a drawback. Don’t get used too much with this feature, as in the CCIE lab exam you don’t have where to point your mouse to show the connection and you have to figure it by your own from the paper (or lately computer screen).

If you don’t want to follow the steps above, then: